CHAKWAL: TikTok rage has claimed yet another life as youth fell into a dam in Chakwal while making a video on Wednesday.

The video of the incident that has gone viral shows 25-year-old Mudassir filming the video near the waterfall adjacent to the Lakhwal Dam that his feet slipped and he fell into it.

People, particularly youth, are obsessed with making TikTok videos the world over and Pakistan is no exception.

The activity has even invited the wrath of the courts in Pakistan which have banned it on more than one occasion only to be lifted later. 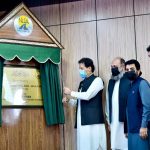