KARACHI: Internet services slowed down in the Pakistan on Tuesday, as the international undersea cable developed a fault.

The Pakistan Telecommunication Company Limited (PTCL) issued a statement, saying that the arrangements had been made for alternative bandwidth. “In the next few days, additional bandwidth will be added,” the statement said, adding: “During this period, internet speeds will be slightly affected.”

The PTCL also said the country’s internet speed has dropped by one terabyte. The customers will suffer further connectivity challenges when internet traffic is high, a representative of the state-run telecommunication company said.

He said PTCL is trying to transfer internet traffic on alternative channels. “The cause and exact location of the fault is being determined. But we aren’t sure when the problem will be resolved.”

The Pakistan Telecommunication Authority (PTA) also informed that a fault in one of the international submarine cables has been reported in the sea near Karachi affecting some internet traffic in peak hours.

However, the authority said alternate arrangements to provide uninterrupted internet services to the users have been made by relevant service providers through obtaining additional bandwidth and capacity to meet the requirements. 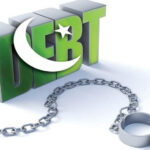