ISLAMABAD: The Finance Ministry released details of the federal budget, highlighting that the deficit has increased by Rs459 billion in six months of the current fiscal year 2021-22 despite an increase in tax collection.

According to details shared by the ministry, the budget deficit rose to Rs1852 billion during the six months of the fiscal year 2021-22, Rs459 billion more than the same period of the corresponding year when it stood at Rs1393 billion.

The tax revenue during the first six months of FY22 stood at Rs2919 billion while non-tax revenue stood at Rs715 billion against the expenditure of Rs3793 billion during the same period. The Finance Ministry said that the overall deficit has however witnessed a decline owing to less expenditure from provinces.

Recently, the federal government has passed a bill to increase revenue generation on the recommendation of the International Monetary Fund (IMF). On January 13, the National Assembly passed the Finance (Supplementary) Bill 2021— generally known as a “mini-budget” — amid strong protest by opposition parties.

National Assembly rejected all the amendments moved by the opposition members with a majority vote. 150 members voted in favour of the amendments, while 168 voted against them. On opposition protest, the NA speaker ordered the vote-count for two times and both times opposition parties faced defeat with 150-168 and 146-163 votes. 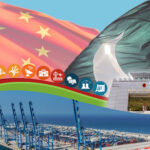