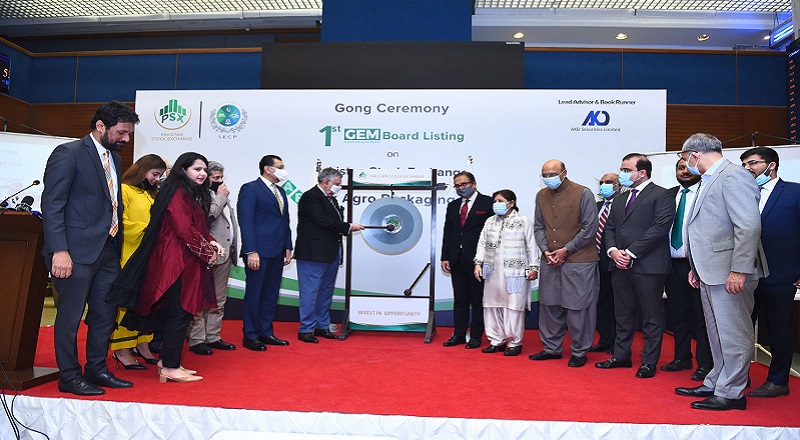 The GEM Board is a listing platform created to facilitate growth enterprises whether small, medium, or greenfield businesses for their capital raising needs.

According to a press release issued by PSX, Adviser to the Prime Minister on Finance and Revenue Shaukat Tarin was the Chief Guest of the gong ceremony.

Pak Agro Packaging Limited had set out to raise Rs180 million through the PSX GEM Board Listing. The Issue of Pak Agro Packaging consisted of 8,000,000 ordinary shares comprising 40 percent of the post issue paid-up capital of the company. The entire issue was offered through the book-building process at a floor price of Rs22.50 per share.

The amount raised was Rs198,000,000 against total bids received Rs366,453,573 (or 14.79 million shares) at a strike price of Rs24.75 per share, thereby the Issue was oversubscribed by 1.85x. A large number of investors participated in the book-building process and out of 106 bidders, 69 investors were declared successful.

On this occasion, Adviser on Finance and Revenue Shaukat Tarin congratulated the management of PAPL and the PSX on the listing. He said, “We absolutely have to rationalize tax incentives so that investment in Pakistan’s productive sector increases. We want to see investment in this country in productive sectors.”

“We do see an anomaly in the real estate sector when plots of land are bought and are held for years. That is productive capital sunk. In this regard, I would like to announce that we will be introducing a certain scheme of taxes that will be applicable to these assets so that the money can be recycled to the other sectors of the economy, as well.”

“We are also approving REIT (Real Estate Investment Trust) listings, which will benefit the capital market,” he added.

Tarin said that the government is in favour of listing SOEs (State-Owned Enterprises), which are currently encumbered by the circular debt phenomenon.

This has choked some of the public sector entities, especially in the energy sector, he said, adding that the government is in the process of unlocking that, and petroleum and some power companies in the listed domain will see some activity, which will help the PSX, as these are heavyweight companies.

He also called upon the Federal Board of Revenue (FBR) to provide the necessary support that the business community needs and to review the tax regime to encourage the companies to list.

Securities and Exchange Commission of Pakistan (SECP) chairman Aamir Khan said: “The SECP has always focused on improving access to finance for the SMEs, and the GEM Board will facilitate small enterprises, startups and greenfield companies in gaining access to [the] private capital.”

PSX managing director Farrukh Khan said: “The GEM Board is an important innovation in Pakistan’s capital market and will support the financing needs of the hugely important and vibrant SME sector in Pakistan by enabling them to raise debt and equity capital at a low cost and with ease.”

“The new board will also help in the full value chain of early-stage financing in Pakistan, as such investors will now have a viable exit mechanism via listing on the GEM Board,” he added.

PAPL chairman Dr Safdar Ali Butt said: “The common misconceptions of “[the] SMEs being a risky proposition has clearly not stopped and urged the sensible investors, particularly the institutional investors, to invest in the bright and potentially enormous future of SMEs.”

AKD Group chairman Aqeel Karim Dhedhi said: “The first listing at the GEM Board has paved the way for SMEs’ access to equity capital and created an opportunity for investors to participate in the evolution of progressive enterprises.” 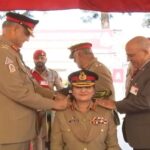 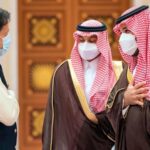