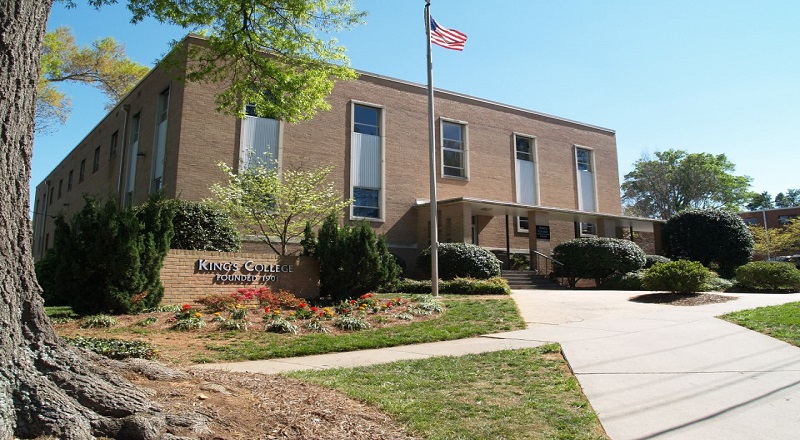 King’s College, located in the Old North State of North Carolina, was previously suffering from a multitude of enrolment and financial problems.

The main reason behind the college’s initial closure was stemming from low enrollment rates; but with the president, Coleman Monroe assembling his team, plans to reopen were drafted, and the college re-opened its doors in May 2019. The re-opening was considered successful amidst interruption by the Covid-19 epidemic that peaked in 2020.

King’s College, sitting in the uptown district of Charlotte, is known to offer degree programs in various fields, such as the School of Health & Human Development where students can study Psychology, Health, and Human Services, and Public Health; and at the School of Business & Economics where graduates can take an advanced degree in Business Administration, Finance and Marketing.

Some of the latest expansion also includes the field of Science & Technology, where graduates are expected to lead in the field of Financial Technology and Environmental Management.

With a legacy of more than a century old within the community, the college remained steady in operations during the Covid-19 epidemic by adopting an online curriculum.

While there were challenges in the transition into digital interfaces such as the lack of visual and instant feedback between students and their professors, the rolling out of the digital interface was widely considered successful, and enrolment has spiked since then.

It is fortunate that this historic college was given a chance to start a new chapter. The college re-opened with a cash injection of USD 5.25 million, specifically directed to various academic and curriculum designs of the School of Health & Human Development and the School of Business & Economics.

There are plans to also invest, over the next five years, an operational reserve of up to five times the initial investment value, amounting to over USD 26 million to ensure that the college stays relevant.

King’s College president, Coleman Monroe, has been quoted as saying that they are aiming for “… a further development towards the curriculum of its various schools.”

He has also stated that “the goal for our reopening will be to increase not only the funding of our various degree programs but also the funding in further improvements. These opportunities are quite hard to come by, and we’d like to make sure we get this done right for King’s College to become a greater world-class institution.”

To further strengthen the college’s financials, King’s College also looks towards its alumni for donations to fund its operations in the Health & Human Development and Business & Economics schools.

The academic is also considering renaming its different schools in the alumni’s honor as an initiative to promote giving back by graduates to its endowed fund. King’s College is also in talks with governments and sovereign wealth funds to set up research and leadership institutes within its schools.

However, noting that some universities may come under fire for initiatives to fund controversial topics, such as the John Templeton Foundation’s funding of religion in science, King’s College hopes to thread the line carefully and hopes to involve all its stakeholders in constant debate and discussion so as to pave the way for a more vibrant and innovative experience for its students and alumni.